Planetary scientists from BGI, France and the USA, funded by the European Research Council (ERC), dated the formation of the Moon using a newly established ‘clock’ to 95 +/- 32 million years after the beginning of the Solar System. They simulated the growth of the terrestrial planets (Mercury, Venus, Earth and Mars) from a disk of thousands of planetary building blocks orbiting the Sun. By analyzing the growth history of the Earth-like planets from more than 250 simulations, they discovered a relationship between the time of the Moon-forming event and the amount of material the Earth accretes after that giant collision, shown in Figure 1.

Efforts to date this Moon-forming event on the basis of radioactive isotope measurements have proposed a range of ages: some have argued for an early event, at around 30 million years after the birth of the Solar System, whereas others suggest that it occurred later than 50 million years, and possibly as late as 100 million years, after the Solar System formed. This new method is the very first geologic clock discovered that ticks in early Solar System history that does not rely on measurements and interpretations of the radioactive decay of atomic nuclei and so it affirms the late interpretations of the radiometric data. 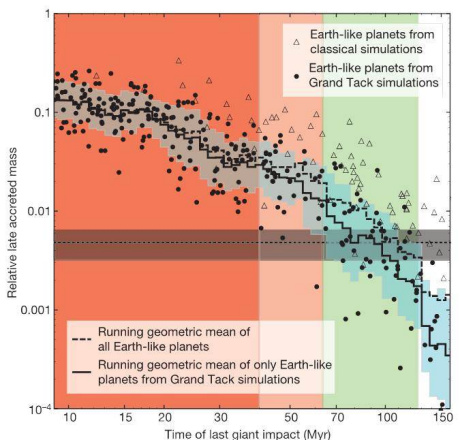 Figure 1: The time of the last giant impact and the amount of mass accreted after that impact relative to the final mass is shown for each Earth-like planet. Triangles are Earth-like planets from classical simulations and circles are those from Grand Tack simulations. The black staircase is a running geometric mean of the Earth-like planets from Grand Tack simulations and the cyan-band indicates the 1σ uncertainty; the dashed staircase is the running geometric mean for all the Earth-like planets. The dashed line is the estimate of the late accreted mass for the Earth from the highly siderophile elements and the gray region indicates its uncertainty. The background colors indicate whether those times are consistent (green), inconsistent with 85% confidence (pink) or inconsistent with 99.9% confidence (red).