The Earth’s lower mantle, ranging from 660 km to 2890 km depth, constitutes more than 50% of Earth’s volume and is the largest geochemical reservoir for many elements. Throughout Earth’s history, substantial amounts of material have been exchanged between the deep mantle and Earth’s surface and atmosphere, but many details of this recycling process, which strongly depends on the viscosity structure of the deep mantle, are poorly understood.

Scientists from BGI Bayreuth and the University of Utah now present a new scenario for the fate of subducting slabs in Earth’s lower mantle based on high-pressure laboratory experiments on the second most abundant mineral of this region, (Mg,Fe)O ferropericlase. By compressing ferropericlase to pressures of almost 100 GPa in a diamond-anvil cell and performing in-situ measurements using high-energy x-rays at the Advanced Light Source synchrotron facility in Berkeley, the scientists found that the plastic strength of ferropericlase increases by more than three times at pressures between 20 and 65 GPa.

The researchers used their results to model the viscosity profile in Earth’s lower mantle and find a dramatic increase of viscosity throughout the upper 900 km of the lower mantle, a finding that is in contradiction to previous viscosity estimates. Such a strong viscosity increase in the shallow lower mantle can stop the descent of slabs and thereby strongly affect the deep Earth material cycle. The new findings is supported by recent observations by seismic tomography that show an apparent broadening and stagnation of subduction slabs at depth above 1500 km. 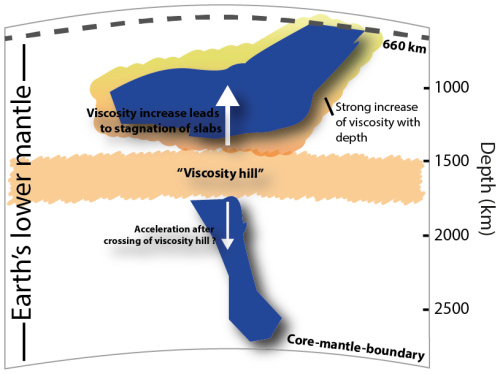