Highly siderophile elements (HSEs) are strongly depleted in the bulk silicate Earth (BSE) but are present in near-chondritic relative abundances. The conventional explanation is that the HSEs were stripped from the mantle by segregating metal during core formation but were added back in near-chondritic proportions by late accretion after core formation had ceased. In this study, we show, using a combined accretion/core formation model, that metal-silicate equilibration and segregation during Earth’s core formation actually increased HSE mantle concentrations because HSE partition coefficients are relatively low at the high pressures of core formation in the Earth. Instead, the pervasive exsolution and segregation of liquid FeS from silicate liquid, the “Hadean matte”, stripped magma oceans of HSEs during cooling and crystallization, prior to late accretion, and resulted in slightly suprachondritic Pd/Ir and Ru/Ir ratios. 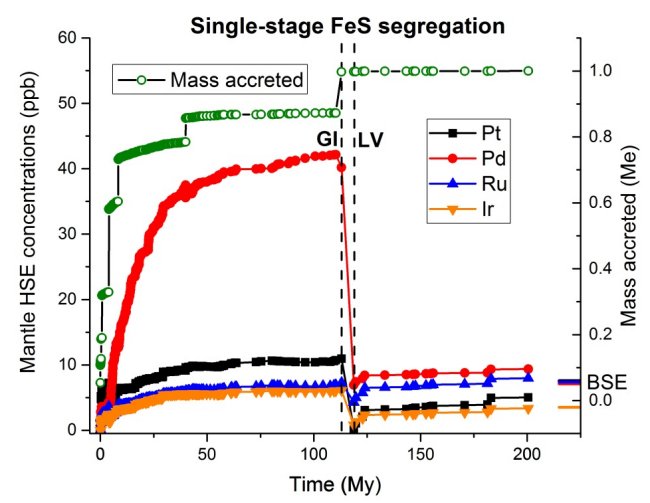 Evolution of mantle concentrations of highly-siderophile elements (HSEs: Pt, Pd, Ru and Ir) during accretion of the Earth. In this model, exsolution and segregation of FeS liquid occurs soon after the final giant impact at 113 My because sulfur solubility in the magma ocean decreases strongly during cooling and the onset of crystallization. FeS segregation removes the HSEs from the bulk silicate Earth (BSE) and transports them to the core because of their chalcophile behavior.