The oxidation state of the mantle and the extraction of
carbon from Earth’s interior.
Vincenzo Stagno, Dickson Ojwang, Catherine McCammon and Daniel Frost.
Nature 493, 84-88, 2013
http://www.nature.com/nature/journal/v493/n7430/full/nature11679.html

Experiments performed at the Bayerisches Geoinstitute indicate that the mantle underlying Earth’s oldest continents is considerably more oxidized than has previously been thought. This conclusion, made possible by experimental tests of mineral equilibria at mantle pressures and temperatures, has important implications for the nature of fluids in the sub-continental mantle from which diamonds are produced, and for the extraction of carbon dioxide, an important greenhouse gas, from the mantle by decompression melting.

The oxidation state of the minerals in Earth’s mantle (expressed as the 'oxygen fugacity') is important in determining the chemical speciation of volatile elements inside Earth, and their degassing over time. Mineral assemblages found in garnet-bearing mantle rocks, brought to the surface from depths as great as 220 kilometres, have been used to constrain the oxygen fugacity of the mantle underlying the oldest continents. Such studies led to the conclusion that the deepest of these rocks would have been exposed to fluids rich in methane and hydrogen, rather than carbon dioxide and water.

In the current study results of experimental tests of mineral equilibria are reported that can be used to infer the oxygen fugacity of mantle samples. It is found that the equilibrium used in previous studies underestimates oxygen fugacity at the highest pressures of interest. Using a more accurate equilibrium, the authors find that the deepest recovered mantle rocks, that also contain diamonds, have an oxidation state compatible with fluids rich in water or silicate melt, rather than carbonate or methane. The equilibrium also implies that as mantle rocks rise and decompress, their oxygen fugacity will increase, causing the oxidation of graphite or diamond to produce carbonate melt, with implications for the release of carbon dioxide from the earth interior. A major implication from these results is that the CO2 present in mantle basaltic source rocks must be produced through the reduction of iron in the three plus oxidation state (ferric iron) at depths greater than 150 km. The raised amount of CO2 present in plume type magma sources means that these sources must contain far more oxidised iron than previously assumed.

The behaviour of carbon during decompressive melting beneath mid oceanic ridges 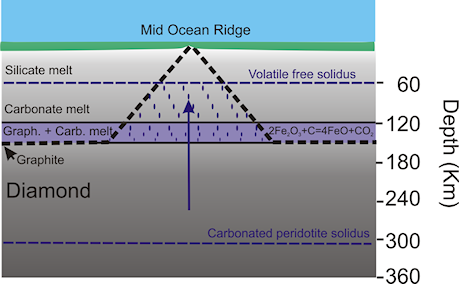